Can You Grill a Frozen Steak? 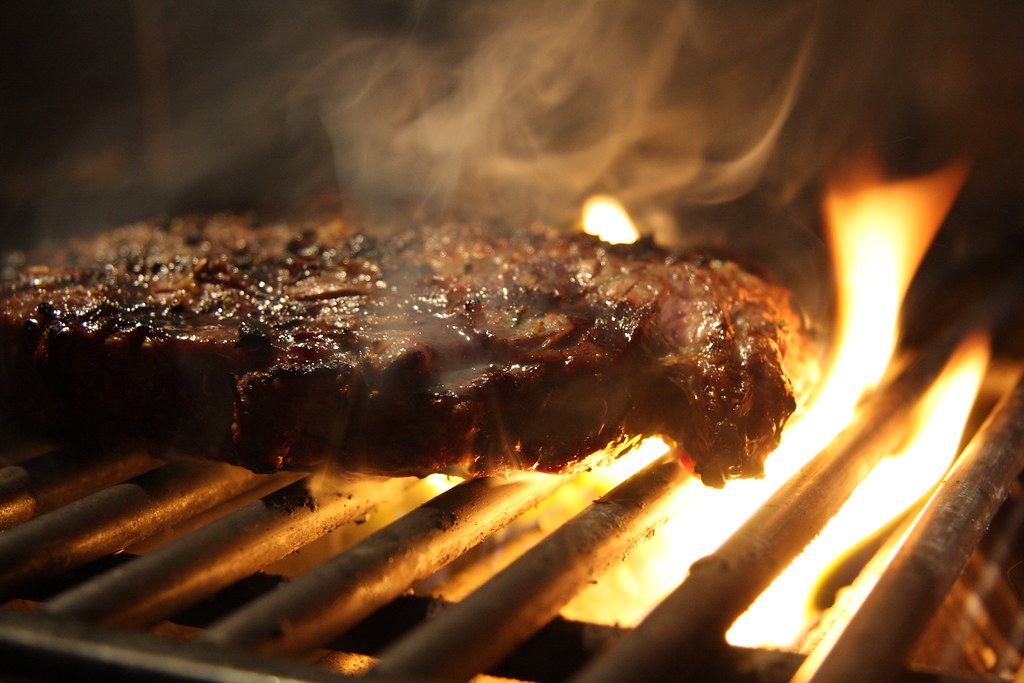 While it might seem to go against traditional cooking methods, cooking frozen steaks directly on a grill can have excellent results.

Imagine getting home from a long day of work and wanting to treat yourself to a fantastic dinner. There’s a frozen steak in the freezer, but it will take forever to defrost. Well, there’s no need to skip on the steak since you can cook it directly on the grill from frozen.

There are several vital points to keep in mind when grilling a frozen steak, such as the steak’s thickness and heat type.

Why Do We Defrost Steaks?

As a general rule, people defrost meat because it’s a lot easier to cook. It’s not a question of safety but more a question of taste. When cooking frozen steak on a pan, it takes a lot longer to cook the inside, and the outside ends up overcooked. Because of this, the steak feels tough after cooking, making it challenging to cut.

Also, reaching the desired temperature to sear a frozen steak is difficult on a pan. The pan won’t be hot enough, and the steak’s juices will start leaking. The meat will eventually cook, but it won’t be a perfect quick sear. Plus, you lose a lot of the healthy juices and nutrients in the meat.

However, cooking a frozen steak on a grill is entirely possible. A grill can reach much higher temperatures than a regular pan, and it allows the combination of direct and indirect heat, which is essential for this method of grilling frozen steaks.

Why You Can Grill Frozen Steaks

You can not only grill frozen steaks, but they will come out very evenly cooked. When grilling a frozen steak, only the very exterior is seared. The steak is entirely frozen, so the inside takes a lot longer to cook. Because of this, only the area of the steak closest to the surface cooks during the searing.

When meat is tender, even a quick sear raises the temperature on the inside of the steak.  So when the steak is ready, and you cut it open, you’ll notice the very middle is pink, while there’s a gray ring of doneness around the steak. In other words, what usually happens is the outer ring of the steak ends up more cooked than the inside.

Therefore, searing a frozen steak on the grill makes the steak pink almost entirely from side to side. The whole steak ends up being pinker, juicier, and tastier.

To cook a frozen steak on a grill, you’ll need three main elements. A combination of direct and indirect heat, a thermometer, and a very thick steak. These three elements are essential, and leaving one out prevents you from obtaining ideal results.

If you usually don’t use a digital thermometer when grilling, this simple tool will significantly improve your grilling abilities. It’s the perfect tool for accurately tracking the temperature of your food. Grilling thermometers usually have a small probe that sticks into the food, providing a quick temperature read.

A thin cut of meat won’t work when grilling steaks from frozen. Since a frozen steak needs a bit more time than usual for searing, a thin piece of meat will overcook during the process. The searing temperature is relatively high, about 350°F. The surface of a frozen steak needs some time to reach that temperature, and the inside meat needs to remain uncooked during that time. Therefore, the steak should be at least 1½” thick.

How to Grill a Frozen Steak

Grilling a frozen steak requires just a few simple steps. Set up your grill, put the steaks on the grill, and monitor the cooking time.

A charcoal grill should take about 20 minutes to heat, and a gas grill about 10 minutes. Once the grill is nice and hot, clean the grates with a brush. To create a two-zone fire on a charcoal grill, place the charcoal on one side of the grill only. When you close the lid, make sure the lid is on the opposite side to create better airflow.

Cook the frozen steak on the grill for about 20 to 30 minutes in total. Time should give you a general idea, but use the thermometer for the whole process. First, put the steak on the direct heat zone for searing, and cook it evenly on both sides.

When the steak reaches an internal temperature between 70ºF and 90°F, move it to the indirect heat zone. Once there, season the steak right away and cook it until you achieve your preferred doneness. Cook the meat up to around 120°F for rare, 130°F for medium, and 150°F and up for well done.

Remember to pull out the steak just about 5°F before your desired temperature since the heat inside the steak will keep it cooking and raise its internal temperature. Once you pull the steak from the grill, let it rest for about 5 minutes.

The next time you have last-minute guests over for dinner, consider experimenting with this grilling method. Simply throw a couple of frozen steaks on the grill, and they should come out cooked to perfection.

It’s never a bad idea to have a couple of thick steaks in the freezer for this reason. However, if you buy fresh meat from the butcher and freeze them yourself, remember to freeze them on a completely flat surface. The surface must stay flat because later, this ensures a perfect sear on the grill.